Formation of a just society where fraternity and solidarity is realized based on the values* of the Sacred Heart of Jesus.Love, Peace, Justice, Harmony, Human dignity.

Sharing the Good News of the Gospel is the primary area of the mission of the brothers. They go about forming and strengthening the laity to take responsibilities in the life of the Church. Towards this, the Congregation runs 4 proclamation centres from where evangelization initiatives are carried on.

Birth of the congregation

Learnt lessons from European religious life and work, how the monasteries cultivated the farm lands and made people civilized and modernized the villages, Fr. Adrien Caussanel S.J. wanted to try them out here.

Inspired by pope singarayar, john the 13th who released a coin on people of India, it is your people who will redeem you. Based on the teachings of the Pope, he concluded that in Tamilnadu, it is the Tamils who should come forward to do the evangelization. It is a congregation rooted in Tamil culture, should take up lighting the light of evangelization. He decided that it would be the appropriate solution to the crisis of evangelization.

He was motivated by the devotion to Sacred Heart of Jesus, revealed to St. Margaret Mary. He found that the devotion was popular among the people spread outside of the monasteries. It is like the king Constantine who saw the symbol of cross, he believed that with the same type devotion to sacred heart of Jesus, he could win over the world.

Satisfied with the conversion and evangelization process, Fr. Adrien CaussanelS.J, wanted to replicate the same experience throughout Tamilnadu by founding a congregation at Uchchankulam.

In 1899, He went over to St. Xavier’s high school hostel, identified seven young men and named them like Jesus selecting apostles and sent them for retreat. And he selected two more youth and sent them also for retreat, who all aspired to be aspirants.

It is on 31.12.1899, at the dawn of the year, the congregation was formally started with the Eucharistic celebration. Three young men offered themselves for the service and consumed Eucharist. But it was not officially recognized by the church rather consent to start the same.

Two years later, after the novena to St. Francis Xavier, few others expressed their wish to join the congregation so then he wrote letter to Fr. Faseville, then provincial of Madurai Jesuit province, about the scope and vision of the congregation that he had intended to start, the activities of the congregation and the training for the recruits.

It was christened as the society of the brothers of sacred heart of Jesus. The mother house to be located at irudayakulam

It had two goals. It is to spread the devotion to sacred heart of Jesus to people through preaching and retreats.

And it is to help and assist the priests and the missionary church in various capacities within the parameters of the congregation stipulations.

After spending some time with selection period, the members were admitted in to novitiate. After spending two years in the novitiate, they were temporarily professed. After completion of 5 years, only then they were given final profession. Before the final profession, the aspirants should renew their vows every year after the end of the annual retreat.

There is no distinct and separate attire for the members. There should not be any differences among them. Though Members could be recruited from all the castes but prudence and diligence should be practiced.

Until then, the members can train themselves, the bishop and the Jesuit provincial should appoint a suitable priest with piety and diligence, to train the novices. Once the brothers themselves could manage to train their novices, the bishop as well as the Jesuit provincial should leave them free and independently to carry on with their own formation and works.

But the bishop and the provincial are expected to guide and to provide them general counsel. They should not assign any duties beyond the limitations and boundaries of the congregation.

It was on the year 1903, on the eve of first year of recognition, as usual there was a retreat at irudayakulam, Fr.Arputham preached the retreat. Fr. Caussanel declared at the end of the six day retreat that he was going to formally start a congregation called a society for the sacred heart of Jesus. Fr. Causannel himself handed over the hand written English version of the aim and goals of the society and its activities to the retreat preacher Fr. Arputham. The preacher in turn explained the same in Tamil to the retreat attendants. The Tamil version of the rules and regulations of the society was also given to them.

After the retreat, 11 members offered themselves to join the society. Among them 8 were admitted as novices and the rest of the three as aspirants. So, it is 11th February, 1903, according to then liturgical calendar, on the feast of St. John D’ Britto, the congregation of brothers of the sacred heart of Jesus (SHJ) was formally launched.

1928 – Silver Jubilee Celebration of the congregation.

It was celebrated without any pomp and fun at Irudayakulam, the birth place of the congregation, at the end of the weekend of May, 1928. It was celebrated for 3 days, Friday, Saturday and Sunday on the month of May, 1928. Morning mass at the grotto and the evening hymns, rosary recital and special prayers were offered for three days. A concelebration mass was offered at the old church on Sunday, the final day of the celebration. Many converts, many beneficiaries of the brothers’ services were all present for the mass and thanked and appreciated the brothers for their services. Brothers offered them food for the poor on that day. The Aspirants, novices and the brothers from Palayamkottai had come on foot by singing hymns and prayers. They had brought with them food and they took their lunch at Veeravanallur on their way and reached Irudayakulam by that evening. After the mass and other celebrations, they went back on the same foot. It was highly witnessing testimony for their simplicity, prayer and service.

Diamond Jubilee Celebrations of the congregation

There was a whole year of preparation for the event. A special prayer was prepared and it was recited by brothers daily with extended arms. Every Friday was assigned to every house to offer mass for the intention of the diamond jubilee. The brothers decided to forego the evening snacks in view of the diamond jubilee year. Holy hour was conducted on any one of the Fridays other than the first Friday in every house. No donation was received from outside for the diamond jubilee celebrations. Each house contributed 10% percent of the brother teachers and income from other sources also was pooled in, savings from evening snacks were all contributed every month.

The Diamond Jubilee celebration took place in Palayamkottai on 27 & 28th December, 1978. In memory of the celebrations, a music cassette was released on THEDUM ANBU at the end.

The centenary celebration of God’s people and the opening ceremony of the new church dedicated to St. Joseph, between April 28th to May 2nd 1976. Fr. Sengolemani was the one who renovated the church. Most. Rev. Ambrose, the bishop of Tuticorin, blessed the church, consecrated the altar and offered mass.

The following day, bishop gave the first Holy Communion and confirmation to 100 children. Bishop inaugurated the exhibition on the sacred heart of Jesus. Br. Victor had prepared the exhibition with the help of novices. Br. Chinnappan passed away on eve of the feast of Lourdes and he was buried there.

The Friends of Sacred Heart

It was started with 17 members on 6th June, 1976 at Palayamkottai. It was founded after the due permission from the bishops of Madurai, Palayamkottai and Tuticorin and the approval of the consult of the congregation. Br. Amaladass founded this unit. 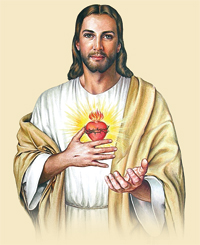 “Our Lord wishes that all the Brothers are Sweet in the Heart and Humble in the Mind”
Fr. Adrian Caussanel SJ
©2020 Brothers Of India. All Rights Reserved.